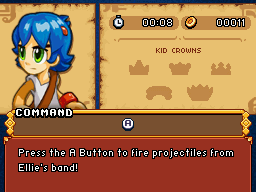 The Kid-Kings are the main antagonists of Monster Tale. They are kids from the human world that have somehow made it to the world of monsters, and they have taken over, enslaving the creatures that originally lived there. The Kid Kings are Meade, Deanu, Zoe, Ethan, and Priscilla. They all have reasons for wanting to stay here and not go back, some motives being more clear than others, and they serve as Bosses throughout the game.

As Ellie and Chomp explore the world and Kingdoms, they have to confront all of the Kid Kings and defeat them, collecting the next Kindgom Key and their crown. All of them except for Priscilla. Ellie gets the crystal to go home when she defeats Priscilla, and when the credits are over, the game restarts where you last saved, her crown still missing from Ellie's screen. She is the only boss you can repeatedly defeat without starting over.

The Kid Kings rule over the kingdoms that were named after themselves. Meade rules Meadeland, (The Caverns, Dungeon, and The Scratch Pit) Deanu rules Deanuford, (The Beach, Aqueducts, and Tubeworqs) Zoe controls Zoetopia, (The Windlemill Plains, Autumn Thicket, and Treehouse Grotto) Ethan has Ethanica, (The Frigid Cliffs, Demon Shuttle, and Factory Fortress) and Priscilla has Prissingham. (The Primhedge Palace, and the Portals)

As the game progresses, Meade, Deanu, Zoe, and Ethan change sides and help Ellie and Chomp overthrow Priscilla and free the enslaved monsters. Except for Priscilla, all of them change from being mean, selfish, and borderline evil to being more understanding, helpful, and kind. In the end, the Kid Kings step down (Priscilla unwillingly) so the monsters can live free again. However, none of them return to the human world. Although it's never stated what happens to them, it is implied that they now live with the monsters side by side, no longer seeing themselves as superior, but equal.

Retrieved from "https://monstertales.fandom.com/wiki/Kid-Kings?oldid=4172"
Community content is available under CC-BY-SA unless otherwise noted.